As you know from my recent posts, I have embarked upon my second Whole 30….why you ask?  Not because i’m crazy but because I genuinely like the challenge it presents, it forces me to be creative with my cooking and I actually feel really awesome by the end so it’s a great reset for me.  One of the challenges that is legit difficult for me is not having Dairy in my coffee.  To be honest, i’m not a huge dairy fan…I can (GASP) live without cheese, I don’t really drink milk, I eat yogurt occasionally so initially I thought giving up dairy would be a breeze! Then I woke up to make a coffee on day 1 of the Whole 30 and almost yak’d after having almond milk in my coffee.  YIKES.  I was especially disheartened after reading the ‘tough love’ section in the whole 30 rules that said this…

I felt like a total chump because it was true…there are things way harder than drinking black coffee.  I get it.  So, I tried drinking bone broth in the morning trying to cut out coffee altogether and that was a BIG MISTAKE (just ask my pod mates at work).  NOT cool.  I literally complained all day, felt sluggish and I was pretty close to throat punching someone, so to me…drinking black coffee IS HARD!!!

So I vowed to find an alternative so I didn’t have to cheat and I wanted to share my learnings and honest reviews with you.

Okay so first up…I attempted to make a compliant creamer myself.  I thought to myself, i’m a gonna hit this up macgyver style!!  I ended up making a cashew and almond creamer blend.  I pretty much used the same method as you would to make homemade nut milk by blending nuts with water in a blender but I reduced the water content to make it thicker and extra creamy.  I then strained it through a nut milk bag and then stored it in a jar in the fridge.

Verdict:  Super creamy, pretty good consistency and the cashews rounded out the ‘almond’ flavour so it was a good balance.  The disappointing part…it probably cost me like 8-10 dollars to make the flippin creamer and because I’m not making granola, I couldn’t even use the left over pulp from the nuts.  I thought it was WAY too expensive of a thing to make every 3-4 days so it happened once and I didn’t make it again.

This creamer uses both almond and coconut milk so it’s a little thicker than using almond milk.

Verdict:  Not bad.  I felt that I had to use a lot of this creamer in order to get my coffee to around the same colour as my usual coffee with half n half.  If you are used to drinking milk in your coffee (not cream), this would most likely be a pretty good alternative for you.  It’s a little pricey (for the quantity) at around 5 bucks so if you tend to like a lighter coffee…be prepared to pay up! I went through this in 3 days.

Nut pods is widely used by both paleo and whole 30’ers out there in everything from coffee to cooking methods.  It is completely Whole 30 approved and has even partnered with Whole 30.  It comes in a few different varieties: Regular, Vanilla, Hazelnut and Pumpkin Spice. 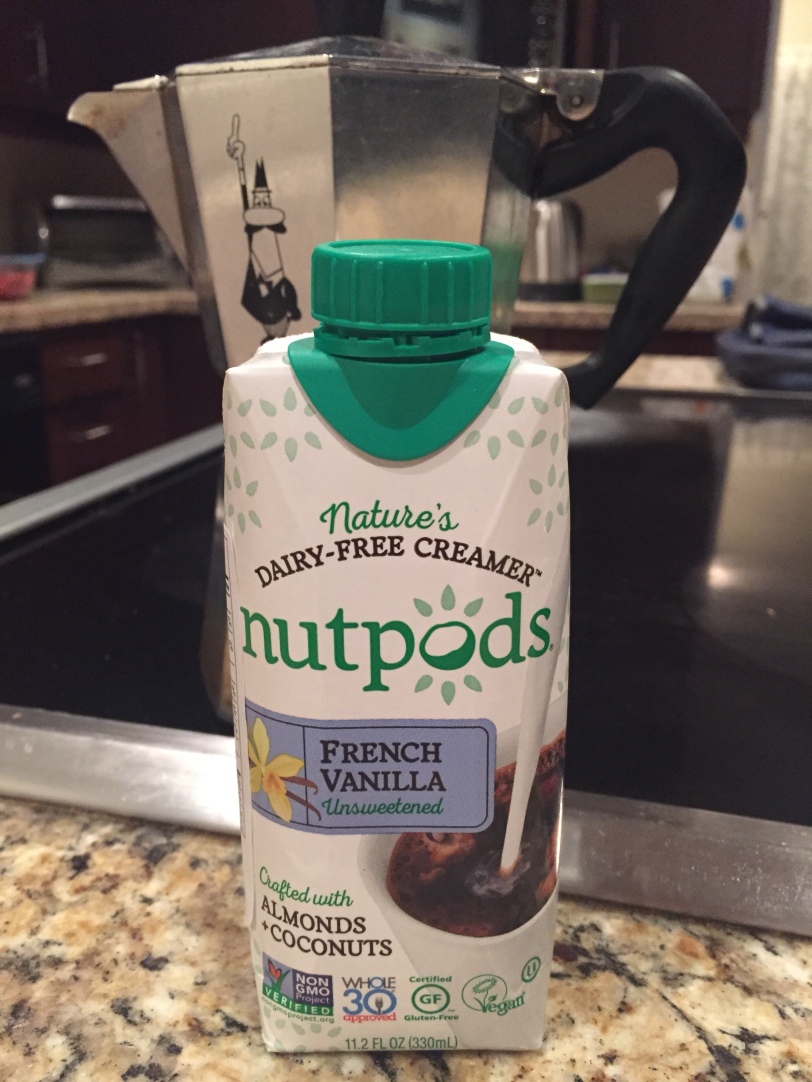 Verdict: I tried the French Vanilla version and it was pretty awesome.  It didn’t require quite as much as the better half to get my coffee to the colour/consistency that I like so that was a win!!  I normally don’t like sweet in my coffee so I wasn’t sure about the french vanilla but it was actually quite tasty.  I think this was my favourite of all of the compliant creamers I tried.  It’s a tad pricey and hard to find in Canada so I did have to order it on line through http://www.naturamarket.ca

This is a very new product and only came out in October of 2017.  I am a huge fan of the vital proteins collagen peptides so I was very eager to try this!! I have been putting a scoop of collagen peptides in my regular brew every morning for over a year and I absolutely love it.  Now that it was available as both collagen and creamer together…I thought this is going to be awesome!  It is completely non dairy and whole 30 approved.  It is a powder form in a container and does not require refrigeration after being opened.  It comes in 3 flavours: Coconut, Vanilla and Gingerbread.

Verdict:  When I first tried it, I just put a scoop of the coconut version in the bottom of my coffee cup and stirred (because that’s what I do with the collagen peptides).  It was not creamy at all, it looked like putting skim milk in my coffee so I was initially disappointed because I put a full 2 scoops in there.  Then I decided to throw the whole thing in my vitamix and blitz and that changed EVERYTHING.  It turned in to a beauty of a creamy latte.  Once blended it was actually quite delicious.  It had a mild Coconut flavour as well so it was a nice little treat.

Gingerbread version: I’m not sure i’m a fan of this to be honest.  I actually really really love gingerbread and those types of spices normally so I thought this would be a great treat around the holidays but I was pretty disappointed.  The gingerbread flavouring seemed off to me…like they added way too much clove to the spice mixture.  So now i’m stuck with this tub of collagen creamer and a major sense of disappointment.  Le Sigh.  I may warm up some nut milk and try it mixed with that (instead of coffee) for more of a gingerbread latte type of drink but I remain skeptical.

Homemade Alternatives that I have tried:

Cashew coffee:  Yup, it’s a thing.  One morning on my first whole 30, I was so desperate for coffee with cream that I decided to throw a small handful of raw cashews (like maybe 6 cashews) in to my vitamix blender with hot coffee.  I blended for about 1 minute and it turned out great, pretty creamy and not bad for a little morning coffee hack.  *Just be sure to use raw unsalted cashews if possible because roasted cashews will taste totally different.  I would also recommend using a high powered blender to make sure all of the cashews blend or else you will have a gritty coffee.

Whole 30 Bullet Proof Coffee:  Normal bullet proof coffee uses grass fed butter, MCT oil and coffee so i thought to myself…what if I just added Ghee instead?  I know many of you are grossed out at the thought of butter in your coffee but don’t be.  When whizzed up in a blender the coffee is very creamy and much like a latte. It does have a bit of a bitter after taste though.

So my final thoughts on this subject are this…there is nothing on the planet that will ever replace the creamy consistency of half n half cream in coffee (for me anyway)…and i’ve tried a lot of products and methods.  The only thing that came remotely close was Nut Pods and this would satisfy me throughout the 30 days as an alternative to half n half.  All of the above will definitely work for you for 30 days of the program and will get you through the tough times.  Just be prepared to drop a lot of cash if you are buying some of these products regularly.

Hope you enjoyed my take on all of the dairy alternatives.