A week ago, me and one of my besties decided to get are butts in gear and start this new year off in the right direction.  We decided to get together and do some meal prepping as we both had a very busy week ahead.

Now I don’t know about you but man, after Christmas, all the food, the extravagance, the shopping and all that ’tis the season’ attitude often results in over indulgence… in the food, weight and the finance department.  As result of both of us trying to be conservative with our spend…we threw in an extra challenge! We were not allowed to spend ANY money for ANY ingredients!!  Yup, that’s right, we could only use ingredients we had on hand.

Confession time:  I have a serious addiction to grocery shopping.  I love it and love having lots of ingredients on hand.  The problem is, I end up with so much stuff, my pantry gets crazy and then I have no idea what I need or have too much of.  So to take quick action, this holiday season I decided to first clean out my pantry and organize it in a way that I could actually locate things in what was formally known as the abyss!!  I have to tell ya…what an amazing feeling.  The end result was awesome!!

Okay…back to our challenge.  So we first did a quick inventory of what each of us had and then we did a little brainstorming to come up with a few ideas that would tackle our biggest challenge…healthy breakfasts and lunches for the work week.  We both realized that we often spend so much time getting our kids ready (she has 3 and I have 1) that we often forget to make things happen for ourselves or are frankly…just too flippin’ tired!

My portion of goods

So, I took my bounty and made my way over to her house.  I was armed with coffee, food and containers to carry everything home.

We started off by making Tortilla Soup using the recipe from ‘Thug Kitchen’.  It’s simple, delicious and a complete cinch to make!!  The other pro here was that it makes a lot and it’s perfect for lunches!!  I also had a boat load of corn tortillas left over from my new years eve party because we did a mexican theme and I apparently thought we would eat 160 tacos???  Thought this would be a great way to use some of them up.

Thumbs up from Super Girl who came in to see what was going down.  We received her approval and then she left to save the world!

We also made some egg muffins for quick on the go breakfasts.  We basically took ingredients like bacon, mushrooms, peppers, cheese, sundried tomatoes and green onions…mixed it with some scrambled eggs and baked them in muffin cups.  The great thing about these bad boys are that they are simple and you can freeze them.  I like doing this because I just can’t eat eggs everyday so I like to switch it up.

Next, we moved on to some mini meat loafs.  I have rediscovered my love for meatloaf.  Seriously, it was something I never ate as a kid…gasp shock!!  The only thing I knew about meatloaf was from movies and it seemed like every kid hated it.  I often recall the little brother Ralphie in the movie ‘A Christmas Story’ reciting “Meatloaf, Beetloaf…I HATE Meatloaf’ so I always thought I would hate it too.  Then I tried it as an adult…WOAH, amazing!!  Anyway, both of us had ground beef in our freezer so boom…this was a natural.  I also had 2 boxes of stove top stuffing in my pantry for some reason so we pulsed it in the food processor to use that as bread crumbs.  We decided we could take these for lunches with some salad or use them at home for the family when we don’t have time to cook and need something quick.  Also super freezer friendly. 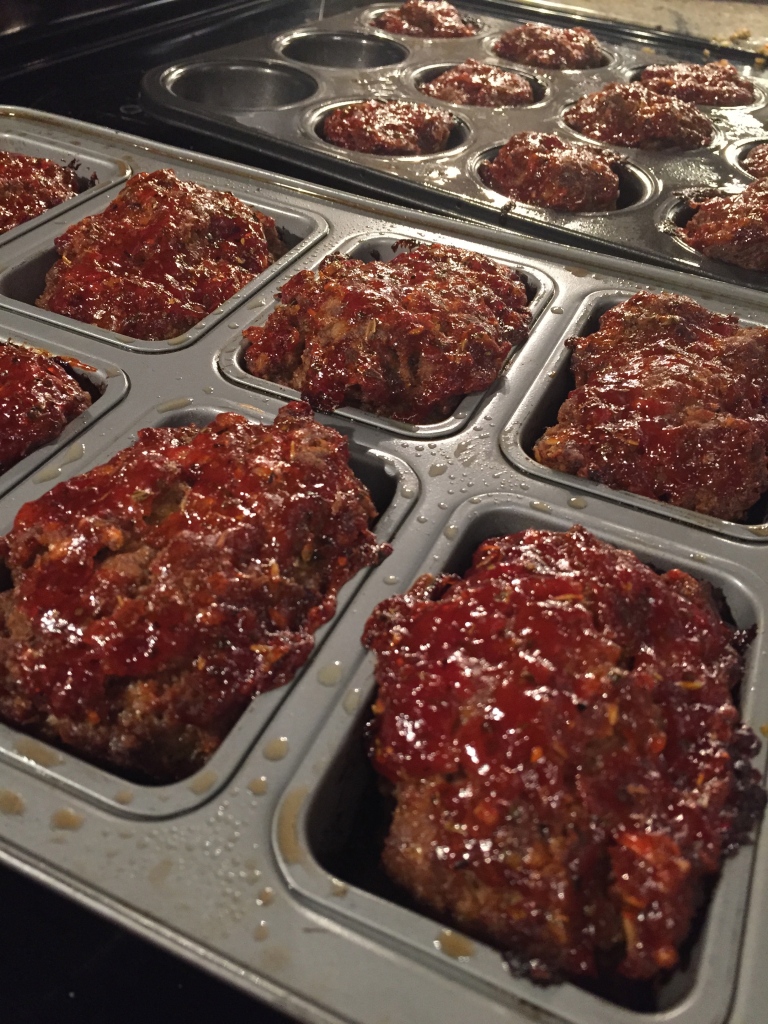 Then we made a ground turkey, vegetable and pesto pasta for the family.  Both of us had major commitments at work and outside of work so we were FULL on from Monday – Friday.  If we didn’t do something to get prepped for this week, we would have been on the fast track to fast food and take out which means…BUDGET BLOWN!!  We may have over cooked the pasta a bit but it was still delicious and my kid ate it…twice last week.  RESULT!

We also prepped some salad fixin’s so we could throw a bunch of stuff in to a bowl if we wanted to.  The help chopping was awesome because it didn’t feel like it was all on one person which can seem daunting on your own.

Okay, so we probably were together for about 4 hours.  We weren’t rushing, it was a no stress, no kids (well except for some quality assurance testing from Super Girl), catch up time with ma bestie and the pay off was awesome.  We made loads of stuff….check it out: 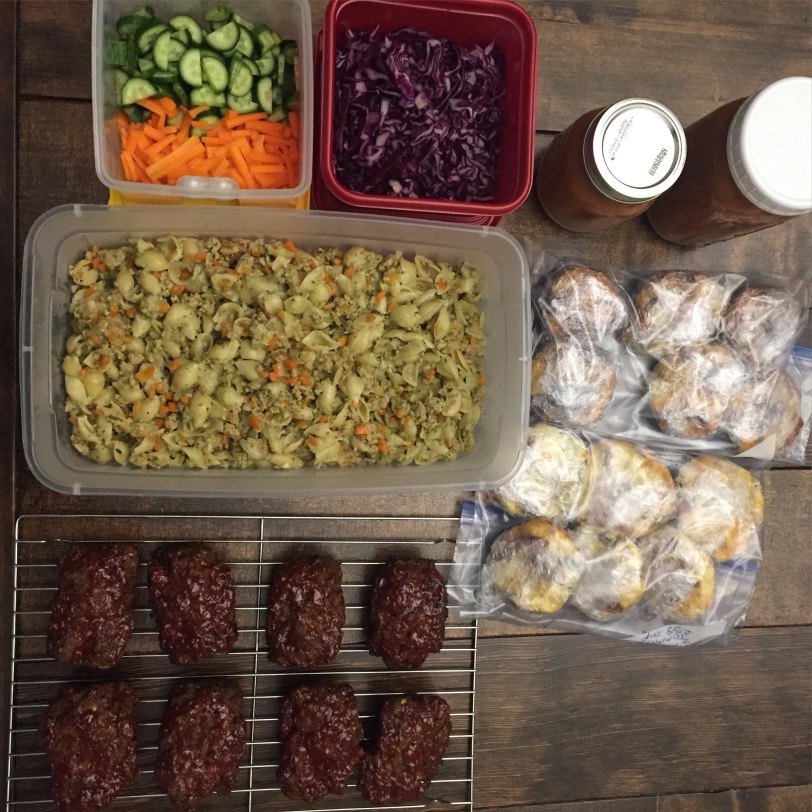 The loot i’m going home with!

I went in to the week knowing that I would kick it’s butt and if it ended up kicking mine…at least I had food.  The best thing of all…none of us spent a single cent on anything!!  I definitely want to make this a regular occurrence and also thought it would be good to go splitsies on stuff from costco once in a while.  I think this might help with the stock piling and might make the inventory a little more manageable.  All in all, it was a fun way to spend a Sunday afternoon and get ready for the week.  Try it…I highly recommend it.